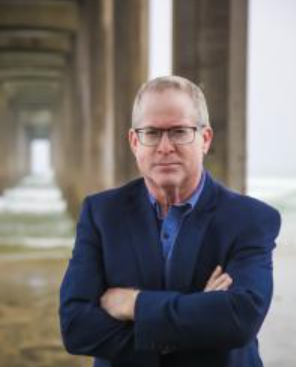 Reserved Seating is available when Doomed Legacy is pre-ordered from Warwick’s through the linked green “Reserve Seats Here” button above. Only books purchased from Warwick’s will be signed. Please call the Warwick’s Book Dept. (858) 454-0347 for details.

On Tuesday, November 15th at 7:30pm Warwick’s will host Matt Coyle as he discusses and signs his new book, Doomed Legacy: Rick Cahill #9. Matt Coyle is the best-selling author of the Rick Cahill PI Crime Series. He was named the 2021 San Diego Writer’s Festival Mystery Writer of the Year, and his novels have won the Anthony Award, the Shamus Award, the Lefty Award, the San Diego Book Award, among others. He has also received nominations for numerous Anthony, Macavity, Shamus, and Lefty Awards. Doomed Legacy is the ninth in this award-winning series. Matt also hosts the podcast Crime Corner with Matt Coyle. He is a graduate of UC Santa Barbara and lives in San Diego with his yellow Lab, Angus.

A sinister private detective agency, a shady shell corporation, and a dead friend – Rick Cahill is on his most dangerous mission yet

Private investigator Rick Cahill has been running from his past and chasing the truth his whole life. But his past is relentless – and so is his CTE, a disease caused by repeated head traumas that has attacked his body and his mind. As his CTE progresses, he realizes that the disease not only threatens his life but also endangers his family’s wellbeing.

As Rick struggles to keep his family together, he does a favor for Sara Bhandari, a business contact. Then, Sara is murdered, and the police believe her to be yet another victim of a serial rapist who has been terrorizing greater San Diego. But Rick has reason to question their theory. Determined to find the truth at any cost, and against his wife’s warnings, he investigates on his own.

Along the way, he bumps up against a sinister private investigative agency and a shady shell corporation that may be hiding more than company secrets. As Rick digs for the truth about Sara’s death, he risks his own life and the lives of countless innocents caught in his relentless crusade. Ultimately, Rick must decide if his quest is worth the risk of losing his family forever.