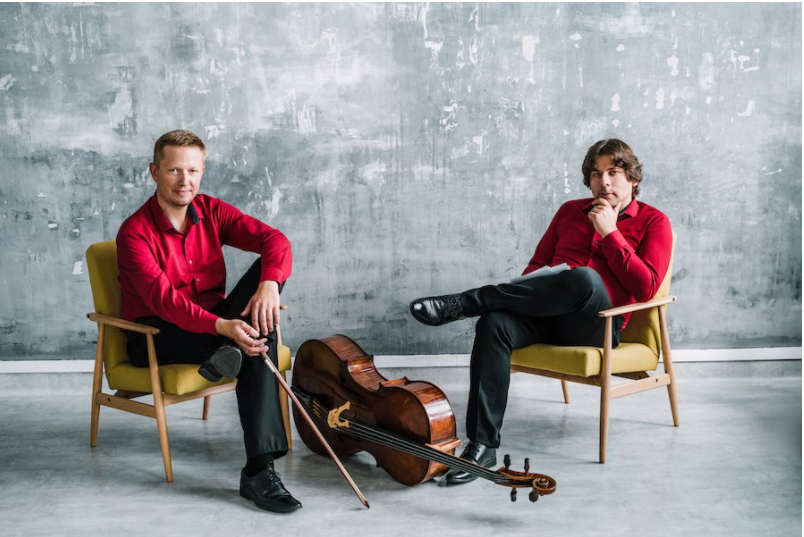 Monday, March 28, 2022
12 PM
Free concerts at noon every other Monday from fall through spring . . . no wonder the Mini-Concerts are the longest-running and one of the most popular classical music series at the library! This series was founded by Glenna Hazleton in 1970 at the Athenaeum, and has been going strong ever since. The concerts feature both local and touring musicians, prize-winning students, university music faculty members, local chamber ensembles. . . and the repertoire also includes jazz, folk and world music. There are no reservations, no tickets . . . just line up at the side door of the Athenaeum before noon. (Donations are always welcome!) Mini-Concerts take place every other Monday at noon and last about an hour.

Magazine “The Strad” wrote about the Cracow Duo: “Kalinowski and Szlezer, friends since childhood, have a wonderfully natural rapport and there is an arresting quality to their playing that gives life to the music”. They studied together in Cracow and Paris and began to perform together as Cracow Duo twenty years ago. Since that time their concerts and recordings received the highest critical acclaim in Poland and abroad with reviews in such media outlets as Polish National Radio, Slovenski Rozhlas, Radio Suddeutsche Rundfunk and important magazines and websites such as ClassiqueInfo, Classical Music Review, Res Musica, American Record Guide, Ruch Muzyczny, Twoja Muza, The Strad and Gramophone.

Musicians performed on the most prestigious stages, including: Seoul Arts Center in Seoul, Alfred Newman Hall in Los Angeles, Carnegie Hall in New York, Palacio de Bellas Artes in Mexico, Salle Cortot in Paris, St. Martin-in-the-Fields in London and Concertgebouw in Amsterdam. They made a few-weeks-long tours promoting Polish music in such countries and regions, as: Middle East (2006); Caucasus (2013); Georgia (2014); USA and South Korea (2015); Mexico (2015; 2016); Brazil and Argentina (2016; 2017); USA (2017); China (2018). In 2010, they represented their hometown at Krakow Days in Nanjing (China).

In 2019 they were recognized with Global Music Awards Outstanding Achievement for the best duo performance in Classical Music.

A similar understanding of music and common artistic vision coupled with a virtuosity and a concert experience have produced interpretations that are emotional, sincere and spontaneous.

Jan Kalinowski (born 1982) Studied at the Music Academy in Cracow, the École Normale de Musique in Paris and the Staatliche Hochschule für Musik und Darstellende Kunst in Stuttgart under the guidance of Professors: Witold Herman, Paul Julien and Peter Buck. He has also taken part in master classes given by David Geringas, Ivan Monighetti and Arto Noras. He received scholarships from Polish and foreign foundations, as well as the City of Cracow, the Malopolska Region and the Ministry of Culture and National Heritage. He has recorded for radio and television, including the cello concertos by Witold Lutosławski (Lebanese National Orchestra, Azerbaijan State Philharmonic) and Marek Stachowski (Beethoven Academy Orchestra). As a solist he has been performing under the baton of many renowned conductors, such as: Rauf Abdullayev, Łukasz Borowicz, Wojciech Czepiel, Jacek Rafał Delekta, Jurek Dybał, Michał Dworzyński, Jacek Kasprzyk, Adam Klocek, Paweł Kotla, Paweł Przytocki, Daniel Rajskin, Jacek Rogala, Maciej Tworek, Alan Urbanek and Antoni Wit. He is Professor at the Krzysztof Penderecki Academy of Music in Krakow, where he holds his own cello class. In 2014 DUX published an album with his artistic project Polish Cello Music containing works by polish composers for cello ensembles from one to eight instruments. Jan Kalinowski also recorded the V Suite by Johann Sebastian Bach for the Bach Society and took part in recording the album: Krzysztof Penderecki – chamber music vol. II Violoncello Totale (DUX, 2017). From 2012 he plays the instrument by Wojciech Topa.

Marek Szlezer (born 1981) Is one of the most sought-after Polish pianists. His career started with the Grand Prix at the International Piano Competition in Rome at the age of 12. He has studied at the École Normale de Musique in Paris, the Music Academy in Cracow and the Chapelle Musicale Reine Elisabeth in Belgium with Ewa Bukojemska, Abdel Rahman El Bach, Dmitri Bashkirov and Marcella Crudeli. He has held grants from Polish and foreign foundations, as well as the City of Cracow and the Ministry of Culture and National Heritage. He is a prizewinner of many prestigious competitions in Poland and abroad. His consummate performances of Frederic Chopin’s music have won him numerous prizes: 1st Prize at the National Chopin Competition in Warsaw and the special prize of the Chopin National Edition. He had the honor to play a concert on Chopin’s original piano at the Jagiellonian University on the night Poland entered the European Union. Marek Szlezer has performed in such prestigious concert halls as Carnegie Hall, Palais des Beaux Arts, Salle Cortot, Wigmore Hall, St.Martin-in-the-Fields, Alfred Newman Hall and NCPA. He has performed with leading orchestras, including the English Chamber Orchestra, National Symphonic Orchestra of Ukraine and the National Polish Radio Symphonic Orchestra. He discovered the piano music of Jadwiga Sarnecka and recorded a selection of her compositions for DUX. He is the author of numerous research papers about piano works of Polish composers, published by Polish Music Publishers and Euphonium, as well as book publications and articles about Polish music. He has recorded several albums (DUX, EMI, Amadeus and Moderato Classics among others), receiving an enthusiastic critical acclaim in prestigious musical magazines (Gramophone, Kulturspiegel, The Strad, Pizzicato, Fanfare, American Record’s Guide among others). He is Professor at the Krzysztof Penderecki Academy of Music in Krakow, where he holds his own piano class.

The concerts will be in person at the Athenaeum Music & Arts Library. There are no physical tickets for these events. Doors open at 11:50 a.m. Seating is first-come; first-served. These events will be presented in compliance with State of California and County of San Diego health regulations as applicable at the time of each concert. Face coverings are required for attendees, regardless of vaccination status. Proof of vaccination or negative test within 48 hours of the event is required. Event capacity is limited to 70% for now.